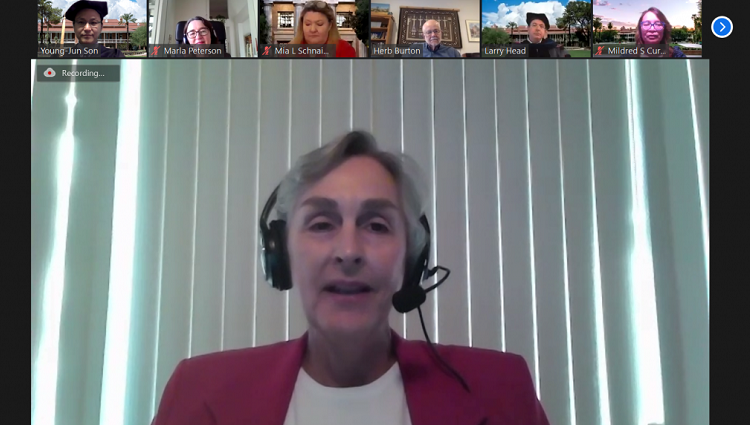 Ann Wilkey accepting her award at the Department of System and Industrial Engineering's virtual convocation ceremony.

Ann Wilkey is a systems engineer with more than 25 years of experience in creating engineering designs and applications, while managing projects worth nearly a billion dollars. She’s also SIE’s 2020 Alumna of the Year.

But 40 years ago, she was a Yuma, AZ native preparing to follow in her four siblings’ footsteps by attending the University of Arizona. While she applied to several schools during her senior year of high school, she always knew she’d choose to be a Wildcat. When it came time to pick a major, Wilkey, who’d always enjoyed math, looked through her options and counted up which majors required the most math units. Systems engineering and engineering mathematics were tied for first place.

“So, I read the three-sentence description of these two majors and selected systems engineering,” she said. “And to think, some people don’t believe in luck or divine providence.”

Wilkey thrived in the SIE program, taking classes in statics, dynamics, thermodynamics, electrical engineering, and applied mathematics. She also received the Wilson Foundation Scholarship, which was critical in helping her continue her studies, and which she would never forget.

“With 100% conviction and certainty, my education at the University of Arizona prepared me for my career,” she said.

In addition to her positions as a researcher and director at the University of Arizona, Wilkey has served on the College of Engineering’s advisory board and contributed to the da Vinci Circle. She has also been a member of the SIE Industry Advisory Council and the university’s alumni council.

When she received her first scholarship in 1980, Wilkey vowed to pay it forward by providing a future student with a scholarship. She’s gone above and beyond in keeping her word, donating to the department as soon as she graduated, beginning to provide scholarships for engineering students in 2004 and establishing an endowment in honor of her mother in 2009.

“I started fulfilling that promise with my first donation in 1985 and intend to continue my support throughout my life,” she said. “Wherever I’ve gone in my career, I’ve always taken the University of Arizona SIE experience with me.”