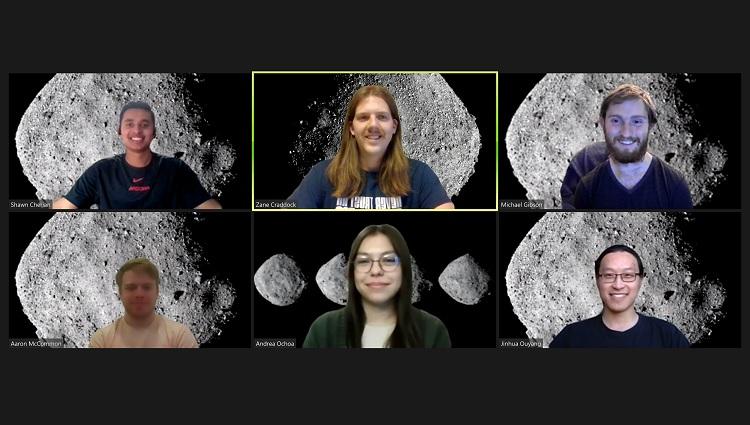 The University of Arizona is leading NASA’s OSIRIS-REx mission, the first U.S. mission to return samples from an asteroid to Earth. By collecting and analyzing a sample from the surface of the asteroid Bennu, scientists seek to answer questions about the makeup of the solar system and the origins of life as we know it. The OSIRIS-REx spacecraft launched from Earth in 2016, captured a sample from Bennu in 2020, and is planned to return to Earth in 2023.

SIE majors Zane Craddock and Aaron McCommon and their Interdisciplinary Capstone team are contributing to a future phase of the mission by developing a method to test the thermal conductivity of asteroid samples. Typically, measuring the thermal conductivity of a material means cutting it into a flat shape so that two flat surfaces, similar to hot plates, can be mounted to the sample.

“Because the Bennu materials are so precious and rare, we can’t modify them, we can’t touch them – we can’t even expose them to the environment,” said Craddock, team lead for the project. “Sample protection is our No. 1 priority. So, without theoretically touching the sample, we have to measure its thermal conductivity, which hasn’t really been done before except in really limited ways.”

This means the samples will need to remain in a vacuum chamber while they’re being tested. Instead of the traditional method, the team is devising a way to use radiation, so that heat is transferred through induction rather than direct contact. The team has gone through several versions of a design for a device. They will be testing its accuracy using material from a meteorite, with a makeup similar to what the OSIRIS-REx team expects from the Bennu sample.