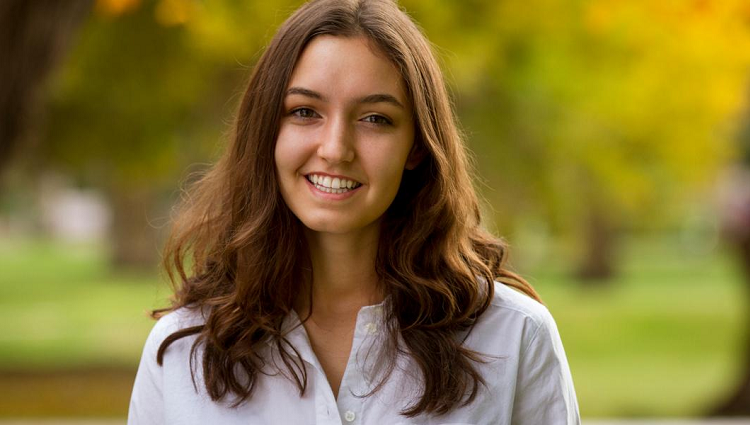 Keara Burke, who earned her bachelor's degree in systems and industrial engineering in 2019, has worked on the OSIRIS-REx mission since she was an undergrad. Originally helping the University of Arizona-led NASA spacecraft to find the perfect place to collect samples on the asteroid Bennu, Burke recently co-authored a research paper detailing the complex history of the asteroid's surface.

The paper, published in Science, details a striking discovery at the mission's primary sample site, Nightingale, where OSIRIS-REx collected samples on Oct. 20, 2020 The rocky debris covering the site had only recently been exposed to the harsh space environment. That means the mission collected and will be returning some of the most pristine material on the asteroid.

Using spectroscopy – a technique that reveals a material's composition based on the pattern of reflected wavelengths of light – the scientists found that Nightingale is part of a population of young craters whose composition reflects mostly red light. Bennu's colors, as revealed through spectroscopy, are much more diverse than originally anticipated. This diversity results from a combination of different materials inherited from Bennu's parent body and different durations of exposure to the space environment.

While Bennu appears quite black to the naked eye, the authors illustrate the diversity of Bennu's surface by using false-color renderings of spectral data collected by the mission's MapCam camera. The freshest material on Bennu, such as that found at the Nightingale site, is spectrally redder than average and thus appears red in the images. Surface material turns vivid blue when it has been exposed to space weathering for an intermediate period of time. As the surface material continues to weather over long periods of time, it ultimately brightens across all wavelengths, becoming a less intense blue – the average spectral color of Bennu.

"It's really nice to work in such a good, smart group of people," Burke said. "Being included in the conversations is kind of unreal. It took a while for me to really be able to believe, 'Wow, I'm on a NASA mission.'"