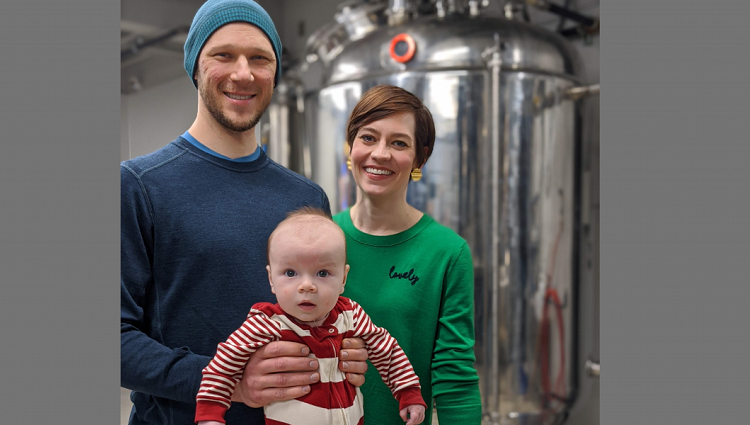 Ryan, Sarah and Raggie Kanto in the production room at Quantum Spirits.

Ryan Kanto, who earned his bachelor’s degree in engineering management and chemical engineering at the University of Arizona in 2007, and his wife, Sarah Kanto, are using their craft distillery to produce hand sanitizer to stop the spread of COVID-19.

The Kantos, who opened Quantum Spirits in Carnegie, Pennsylvania, in 2018, decided to act when industries like the local sewer and water networks began asking them for help. Distilleries have become go-to sources for hand sanitizer manufacturing because they have the most important raw ingredient: alcohol. Hand sanitizer is 80% ethanol, combined with a bit of glycerin for moisture retention and hydrogen peroxide to kill off spores.

Production is still ramping up, but the distillery is making about 80 gallons of hand sanitizer a week, with plans to double or triple output. Because making beer is one of the early steps in the distilling process, the Kantos are also looking into collaborations with local breweries. They can take beer from brewers and further distill it into hand sanitizer.

Kanto said his background as an engineer left him well prepared to pivot the business model of Quantum Spirits.

“Engineers, we’re all about problem solving and entrepreneurship and being creative,” he said. “Studying chemical engineering and engineering management were extremely critical. Without that background and those skills, I don’t think I would have been able to pull it off.”