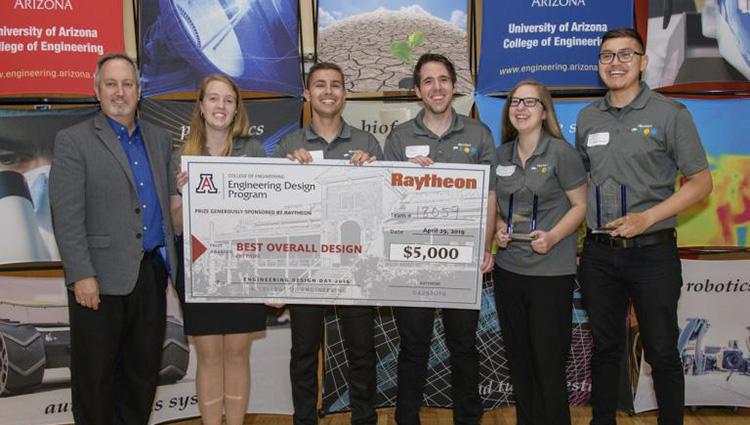 On April 29, at the University of Arizona's 17th annual Engineering Design Day, nearly 100 SIE students showcased two semesters' worth of sweat, tears and time on their senior capstone projects while competing for more than $35,000 in prizes.

Systems engineering major Luis Gama was on the team that took the $5,000 grand prize. They created a mesh network of beacons that can transmit emergency signals from a smartphone app in a remote area to a central location, such as a ranger station. The beacons can survive a 5-foot freefall, 30 minutes under a foot of water and temperatures ranging from minus 40 to 180 degrees Fahrenheit.

The team, which also won the Prototron Circuits Award for Best Printed Circuit Design, designed the beacons, the app and a mechanism to drop the beacons from a drone.

Gama once got lost on a hike in California and ran out of water himself. It would be much more serious, he said, to face such a situation in the heat of Arizona, where about 600 search-and-rescue missions are conducted each year.

Congratulations to all SIE's hardworking seniors, including those on the following award-winning teams: